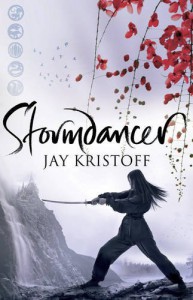 Very, very mixed feelings here. I sort of enjoyed it, but...

I liked the second part better, in part because I'm not too fond of treks in the wilderness/mountains, and also because of the more complex political layers I could sense in it. Also, Yukiko had to grow up, from the sulking girl of the beginning to one who finally understood that things weren't always what they seemed—and grow up she did.

More problematic was the balance when it came to the Japanese influence: I constantly felt it was either too much or too little. The first 100 pages or so contaid a lot of exposition/descriptions, clearly intended for people who don't know that culture; however, as soon as you know just a little, it's already too much. It's worth for the language as well. My knowledge of Japanese is very limited (2 hours/week for, what, two semesters?), but it was enough for me to notice all the glaring mistakes and weird approach. For instance, "shima" means "island" (among other things—you can't tell without the kanji), so "the Isles of Shima" is, uh, "the Isles of Island", which is definitely weird. Another example: when characters, who're supposed to speak "Japanese" (and we're made to feel like they do, it's too close in influence to pull the "it's only inspired by it" card), end up translating expressions. There's no way Buruu, linked to Yukiko's mind, would need her to translate an expression like "arashi no ko". So, for me, it was really troubling, and I'm positive such words could have been translated for the readers without having to resort to such devices.

My other problem with the novel came from some of the secondary characters, who weren't given enough spotlight, or were given too much for plot-device reasons.

First, Aisha, who looked so promising, looked like she could've done and been so much more, and then... nothing. Second, Hiro, whose part was important, but whose influence in the firs two thirds of the novel sprung just out of nowhere. I would wonder: "Why is Yukiko thinking of that guy with green eyes? She only talked to him for five seconds at the beginning of the book." It was like insta-love fuelled by nothing.

On the other hand, there's ground for a lot of interesting things in terms of world-building, and in how the blood lotus flower and the environmental problems play a part in Shima's setting. I may pick the second book at some point after all, to see what becomes of this world.