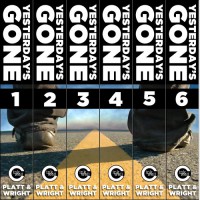 (I received a copy through NetGalley, in exchange for an honest review.)

I seldom read serials, and I admit that reading one in the shape of a “novel” of gathered episodes kind of defeats the purpose (all the more since the authors mention their love of cliffhangers at the end), but… nevermind. I was in the mood for post-apocalyptic stuff, anyway.

So far, this first “season” isn’t the most original thing I’ve read when it comes to this theme: most people gone, survivors trying to figure out what happened (with some being really awful chaps), mysterious aliens-or-zombies creatures that may or may not be the reason behind the catastrophe, an infection… It’s part alien sci-fi, part zombie post-ap, and readers who enjoy the typical tropes of such stories are likely to get their share here, although at times it felt like a jumble of subplots more than a structured story, as if the authors were going along with whatever struck their fancy. This may or may not be true; I couldn’t make up my mind about it, as every time some new elements was introduced, I thought “yet another idea…, then “this could still come together in the end, with more seasons to go, depending on what they do, so let’s wait and see.” Truth be told, we don’t get a lot of clues about what’s happening behind the scenes; the hints are more of the gory variety (the worms, people being killed…)

The format itself is very TV-like, an obvious goal, and one I was looking for. It wouldn’t be difficult to imagine this serial as episodes, complete with regular shifts from group to group. This worked well enough for me. There’s no shortage of action, and as the focus jumped from one character to another, I often found myself wanting to know more about the one left in a predicament… while also wanting to read about the current focus, that is. There were a few boring parts (I didn’t really like the ones about the kids, the Uno game, etc., as I was of course interested in what the characters would do as survivors), especially in the middle, although the pacing managed to bring me back in again in the last third of the book.

The characters are fairly typical of such stories. Survivalists (both good and bad people), some of whom were united by strange dreams and knew beforehand they had to prepare for the apocalypse. An ex-government agent/spook. A pregnant teenager from a conservative family. A father who now regrets he let his work get in the way of his family. A mother trying to protect her daughter. A young man who finds himself stuck, supreme irony, with his abusive stepfather, instead of the latter being dead/gone like most other people. A guy whose last conversation with his now-gone wife was an argument. A kid who meets an old man, the latter taking him under his wing. Even a serial killer.

I remained torn about these characters for most of the story: some of them are uninteresting and would deserve more spotlight to be allowed to shine, but others are definitely intriguing, even though not always exploited to their best, plot-wise.

Boricio was one of the vilest ones in this story, and yet, in spite of all the revolting stuff about him, especially the way he treated women, he also had a sort of “heroic bastard” side to him, probably because he was written with a humorous, slapstick comedy side; oddly enough, some of his scenes were enjoyable… in a much twisted way--like a train wreck that you can’t help but keep looking at. Edward, too, was fascinating: I still don’t know what’s true about him, what’s make-believe, who’s right about him, and let’s not forget the twist at the end of his arc in this first season.

On the other hand, the female characters were a letdown: mostly here to be the object of violence (Callie, Paola after her dream) and/or to be rescued and protected (Teagan, Mary and Paola) by the guys. The only “active” female character is the one in Boricio’s narrative, and she’s clearly one of the baddies, on top of not being developed anyway (Callie is first shown as badass, same in her flashback, but quickly devolves into frightened-girl-in-need-of-protection). And don’t start me on the rape scene, so nicely wrapped and dropped under the rug as a sort of afterthought; that was seriously infuriating. Definitely not the way to write such a scene and its aftermath, to say the least.

In terms of writing style, something that bothered me was the use of numbers (it feels really weird to read “20 yards” and not “twenty yards” in a novel – though maybe it’s just me). Another issue was a tendency to resort to “descriptive” sentences (he did this, she did that), which ended up in a lot of cases of “telling, not showing.” Finally, the dialogues also felt stilted most of the time, with a lot of flashback-type narratives when characters revealed what had happened to them; not uninteresting in itself, but told in ways that didn’t feel very natural, as if they were, well, scripted.

Conclusion: 2.5 stars. I will likely read book 2, since I also got it through NetGalley anyway, because “Yesterday’s Gone” was interesting in more than one way. But I can only hope that this series will improve in terms of writing style and character development (and that we’ll get actual revelations about the monsters and the shady ops guys).