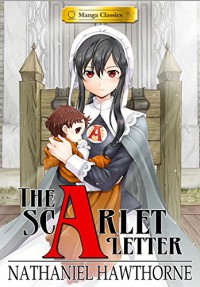 Caveat: the ARC copy I got was backwards, which doesn't make it too easy to read on a Kindle or tablet. This won't be an issue with the paper copy, though—and readers not used to manga format won't be too lost, since this is explained in the book.

This isn't the first manga in this series I read, and like the others, while obviously not dealing with every single detail of the novel from which it's adapted, overall it provides an accurate enough reading of said novel, making it easily accessible. (Even though I haven't read Hawthorne's “The Scarlett Letter” in 10 years or so, and my memories of it are fairly fuzzy.)

While quite a few things are omitted, this is likely for the best. The novel is ripe with dialogue and descriptions that wouldn't sit too well in comics format, and condensing the story was the only way to go. The stifling atmosphere of Boston when it comes to Hester living there after she got her “A” letter is depicted fairly accurately: townspeople shunning her for her sin, their hypocrisy when they nevertheless buy her embrodery and use her works daily, how they do so while telling others “don't accept her works because she's a sinner”, etc. Pearl's wild streak is represented through her relationship with the forest, where she is presented as free, at ease, playing with wolves, and through her slightly slanted gaze, a bit mysterious, a bit like some kind of “witch-child”.

I wasn't sure about a couple of things that were shortened, though. Chillingworth's slow revenge, for one: I don't think all the little things he did to make his “victim” more sick were so obvious in the manga. And some of the characters' psychology—it would've been interesting to see more of Hester's relationship with Pearl's father.

The artwork, as usual in this series, is really good, with emphasis placed on clothing and on keeping the panels clear enough. The “A” letter is the only note of colour in the whole manga, a graphic choice that allows its weight to constantly bear on the characters no matter what they do.

Conclusion: As expected, it doesn't and wouldn't be able anyway to encompass everything Hawthorne included in his novel. However, I think this manga summarises “The Scarlet Letter” well enough, and could very well make a reader potentially interested in going further and reading the original story.