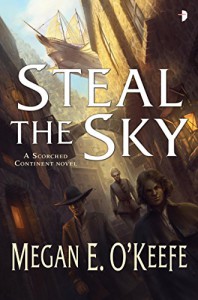 [I received a copy of this book through Netgalley, in exchange for an honest review.]

An interesting world with a lot of background remaining to be discovered, and characters that all hide more depth than one would think at first. However, I found the story itself somewhat confusing.

It starts with an offer that our main thief/conman character, Detan Honding, is in no position to refuse, coming from the very captain of the Watch. A strange request: steal the newfangled airship of ex-Commodore Thratia, an exile from the the Valathean empire, infamous for her ruthless methods. Soon enough, though, Detan and Tibal, his friend and associate, realise they may be out of their depth here, and that the players involved aren't so easy to thwart.

A lot of things revolve around selium, a strange gas found on the Scorched Continent, that can only be manipulated by sel-sensitive people. Privileged in a way, but slaves in many others: they have no other choice than to work in the selium mines (regular people won't be their friends if their shirk their “duty”...), those who lose their skill are forced into retirement, and those with “deviant” talents are sooner or later captured and experimented upon by the Valathean “whitecoats”. Not such very enthralling prospects. As for criminals in Aransa, the mining city where the story is set, they can choose to die by the axe, or to “walk the Black”, aka letting the scorching sun of the obsidian desert kill them in a matter of minutes (if they're lucky).

There's a lot seemingly going on behind the scenes. Valathea, for instance, with its blend of refinement and cruelty (I couldn't help but envision a mix between Roman and Chinese civilisations, in terms of conquest and clothing, with airships and an elite corps of scientists bent on dissecting people with sel-related abilities). The Scorched had a “Far West/unconquered land” vibe in some ways—perhaps because of the whole desert thing and of how it tried to remain out of Valathea's influence, but could feel it pressing down closer and closer. Additionally, many characters appear simple at first (Detan is a conman, Ripka the loyal Watch captain, Thratia a ruthless manipulator who won't hesitate to kill people, the doppel a mysterious killer with a single goal...) yet soon show signs of being more than meet the eye, with agendas and knowledge of their own,

However, while the world felt rich, and provides enough ground to cover more than one book in that regard, the plot was a bit all over the place, as if it couldn't decide what to focus on. The expected heist (stealing an airship) wasn't so exciting nor given that much attention, with our conmen being more outclassed than actually able to properly work on it, and with the story veering into murder investigation, and revenge, and intrigue, and a few more things. This felt more confusing than anything else. I guess this is partly a case of “it's not the book, it's me”: I like heist stories, but I like them with my burglars/conmen being able to have a marginal success at least. Here, both Detan and Tibs went from failure to failure, with Detan losing his “rogue” charm, and after a while I didn't really care anymore.

2.5 stars. The setting remains interesting, so I may check the next book if NetGalley or the library has it, because the group at the end has potential for good adventures, complete with an already existing dangerous enemy, and with another potential antagonist looming in the background. We'll see.