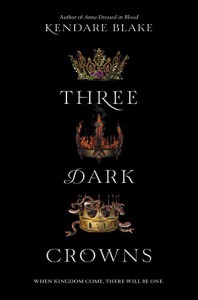 [I received a copy of this book through Edelweiss.]

This is the story of an island on which, every generation, three potential queens are born: one with the power to poison and resist toxins, the other to command elements, the third to befriend animals and make plants grow. On the 16th birthday, then begins the year during which they have to fight, and only one of them will survive. ‘Fight’ meaning, of course, that the winner can only become so by killing the other queens, a.k.a as her own sisters.

Sounds like a gruesome premise, and obviously this got my attention, especially since two of the queens are complete underdogs, and presented as such from the start (the poisoner isn’t very good at resisting poisons in general, and the naturalist one can’t even make a bud flower, least of all call her own familiar). It’d be too easy for them to just get offed quickly, though, so I expected political manoeuvers and other intrigue moves. Which I got, at least partially, as the poisoners aim at discreetly making their queen look more seducing in order to garner support (get people to like you best, and they’re more likely to try and protect you from the other queens), and the elementalists hatch a plan of their own, with the poisoners in turn trying to divert it...

Too bad the story developed so slowly, and in a way that didn’t even allow to develop the queens’ characters that much. Well, to be fair—it’s not uninteresting, it’s just that, all things considered, the setting was ripe for much, much more intrigue (or to get more quickly to the beginning of the Ascension Year). So 80% of the book read like a prologue. On top of this, a couple of things rubbed me the wrong way; unfortunately, they were things that took up quite some space:

- The style. Sometimes I can do with third person present tense; other times, it just feels weird, and keeps throwing me out of the story. This was one of those times. (I’m really not convinced by that narrative style in anything longer than 20-30 pages, to be honest. Still waiting for a story to fully convince me.)

- The romance: Katharine’s... all right, there was a political edge to her getting lessons in seduction, and once you can seduce, I’m not surprised to see romance ensue with someone at some point. But Jules’s took too much from ‘Arsinoe time’. Not that I didn’t like Jules herself, only the guy takes up screen time instead of letting us see the Jules/Arsinoe relationship, which could’ve really shone as a strong friendship, and... let’s be honest, he’s nothing special, the triangle (of course there’s a triangle) is nothing special, and all the fuss didn’t make much sense to me. Colour me callous. Get out, Joseph. You’re an appalling boor.

This said, I was expecting a twist at the end, and there was one, and for once it wasn’t the one I was expecting. So there’s that, and I still want to read the next book to see how the actual Ascension Year is going to unfold (hopefully with more intrigue and less half-baked romance).

On the positive side:

- The characters weren’t too clever nor developed, but I quite appreciated that they weren’t all black-hearted, and certainly not from the beginning. As much as I bemoan the lack of intrigue-action, this kind of story wouldn’t be interesting at all if the characters supposed to kill each other could do so with a flick of a hand without even arching an eyebrow. Mirabella is sweet, and the one who’s least blinded by hate. Arsinoe is very much no-nonsense, knowing she’s very likely to be the first to die, yet not spending her time woe-is-me’ing herself. Katharine is scrawny and weakened by her training, but she doesn’t cry over it, and keeps doing her best and putting her willpower into it. They’re not perfect, oh no; nevertheless, they each have a likeable side.

- Surprisingly, I liked Billy, too. You’d think ‘obvious love interest’, but he was definitely more the good, loyal friend than the charming suitor, and this worked much, much better for me. Also, his (kind of) ballsy move at the Disembarking.

Conclusion: 2 stars. I really liked the last 20%, but I wish more time had been spent on the actual intrigue, with more blood and twists there, and less on the romance.