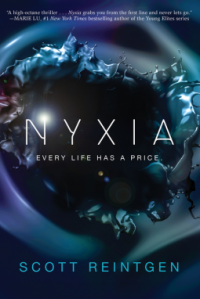 A fast-paced and fun read, although in the end I wasn’t particularly impressed. Perhaps because, while I enjoy the ‘tournament’ trope to an extent, I’m happier when it doesn’t extend over the whole story? I liked reading about the competition at first, but towards the end of the book it left me somewhat cold, as the cool tasks from the beginning became repetitive. I think it’s also because in made little sense once the book reaches it turn after the 65% mark or so, and you realise that pitting them against each other like that from the beginning had a huge potential for backfiring (and, no surprise, it does).

I was also on the fence regarding the nyxia mineral, which seems to be able to do everything, make coffee, just add water. I’m totally OK with a substance you can manipulate through willpower, and that may even be sentient to an extent, but I need some more explanation as to how this suddenly makes a space trip possible in 1 year instead of 27, for instance, or allows to create instant multi-language translators.

As far as the characters go, they worked for me as a disparate group with strengths and weaknesses, and there are a few I liked well enough, like Kaya, probably the one smart enough to understand what’s really going on; yet individually, not many stood out, and I could only get a solid grasp on a couple of them rather than on the whole crew. As for the romance, it sprang up from nowhere, had no chemistry, and is to be filed under that category of insta-romance that is only here so that we can tick the box on the bingo sheet. (Seriously, why must YA books have romance everywhere? Half the time, it just doesn’t work.)

Moreover, I’m not sure the attempt at bringing diversity worked too well, probably because we still end up with several Americans in the lot instead of having a really worldwide cast, and their cultural differences as a means of enriching their relationships and background weren’t really exploited. We see a little of it through Bilal and Azima, but the others? Not so much. They could all have been from the same city, in the end, it wouldn’t have made much of a difference. There was much more potential than was actually exploited here, and that’s too bad.

Conclusion: A story whose beginning was better, but that didn’t live up to the expectations it had set for me.