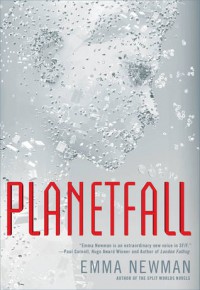 Science fiction that is more of the social kind than hard, as in, while it was easy to imagine how the colony ran, the story focuses on the main character and her relationships with other people, rather than on a lot of technology. In a way, I liked this aspect, but on the other hand, with Ren being pretty much a recluse, her interactions weren’t always so developed; in the end, I’m not exactly sure what to think of it.

The storuy revolves around Ren, and in a certain measure Mack and Sung-Soo. More than 20 years ago, Ren and Mack embarked on an expedition throughout the stars to find another planet, guided by Lee Suh-Mi, who determined that planet’s location after waking up from a coma. After landfall, they found a strange structure they quickly nicknamed God’s city, into which Suh-Mi walked in, never to come out. Since that time, every year sees a ritual, almost religious ceremony take place, which will last until the day Suh comes out again. Only it quickly becomes apparent that this is all based on lies crafted by Mack and upheld by Ren, for fear that without it, the community’s union and focus will collapse, and the colony will be destroyed.

I spent most of my reading torn when it came to Ren as a character and narrator. It’s obvious that while she’s competent in her job, she’s also broken in quite a few ways (her reclusiveness, the reason why she never lets anyone into her home, the mental disorder she’s been developing due to all the stress and lies piling up), and this made her touching; you can tell from the early chapters on that she’d endured trauma and has been coping and suffering all by herself, ashamed of her choices, then refusing to look at them, then not even realising anymore that she had a problem (one that is all the more important that all the things she hoards are materials that can’t get recycled to fuel the colony). Yet at the same time, it was difficult to relate to her and to really care about her, probably she keeps people at a distance. Also, due to the latter, the other characters never really came into focus: Nick remains ‘the guy who’s in because he had money’, Carmen is ‘that annoying religion-obsessed woman’, and so on.

The foundations of the colony, too, were of a kind that made me cringe. Let’s be honest, I’m not a religious person, and basing such a whole expedition on ‘finding God’ (with the potential consequence that, if the religious aspect is destroyed, everything else is, too) seemed, I don’t know, flimsy. Deeply, I believe that what a society needs is ethics, and not religion: the latter can too quickly devolve. Which makes Mack’s lies and fears sort of understandable, if not justified, considering all everything goes to the dogs when the lies are revealed (because they will be, that’s half the plot, after all). In the end, I found myself not caring whether the colony collapsed or not.

Still, I enjoyed the world-building: the author didn’t need to explain a lot for me to picture this world, with its self-sufficient, half-living houses, built at the foot of that bizarre organic city that will kill whoever gets too deep inside. And while I kind of guessed quickly what the big secret was (it got dragged for a little too long as well), trying to imagine what happened to the people in the other pods was also enjoyable. The writing style itself was pleasant, and I never struggled with it. Besides, it looks like there’s much diversity in that colony, but it’s never presented in a heavy-handed way (‘oh, look, people of colour!’). Ren as I perceive her is likely black or close to, the founder/pathfinder is Korean, several other are probably of Indian or Pakistani origin, it’s not ye olde average colony full of white men only, and it’s also not emphasised: these people all come from different backgrounds and areas of the world, and it’s normal, and it’s normal that it’s normal because why would you ever expect anything else? In other words, the book doesn’t feel the need to justify anything about it, which is great.

The ending is somewhat controversial. I think I liked it, in general; it feels like giving up, and it leaves quite a few things unexplained when it comes to God’s city, but it was strangely fitting (with Ren having to first strip herself of everything that was dragging her down, in order to understand what they had refused or been unable to see in the beginning). However, I also think that some parts of the plot were not sufficiently explained, or dealt with too quickly, especially the part about Sung-Soo; had this been better strung into the narrative, its impact would have been different.