Evil: The Science Behind Humanity's Dark Side 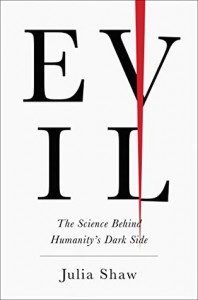 Interesting in its own ways, and raising a lot of prompts to question oneself about how we define ‘evil’, if such definitions are actually applicable, what would make us think a person is evil, or whether we are all capable of evil (and if we are, then what prevents us from tipping that way). Most examples given I already knew (Hitler—obviously, or the Milgram and Stanford Prison experiments), but it didn’t make the questions less valid, of course. Like many things, the ‘evil’ label can be applied in haste, as a shortcut, and there are times when I believe it is indeed valid, and others when evil has nothing to do with it. Times when we tend to use the label to mean something that is too different from our own experience for us to want to acknowledge it and not treat it as ‘other’.

And it is definitely a tricky subject. It is not so easy to calmly consider, say, the case of paedophilia, and try to see people experiencing these urges as people who need help rather than just as ‘evil people who should be castrated’ (note that I wrote ‘experiencing urges’, which doesn’t necessarily mean ‘acting on them’). Are those people ‘evil’? Are they more victims of something they can’t control? And what would be more productive: just labelling them, or trying to find solutions to help before something bad happens? Probably your mileage may vary here, but I get the point, and I agree with it, that pointing the finger is seldom a solution in itself—and that saying ‘it’s evil’ is basically useless anyway if all we do is say it instead of acting. Which raises other questions, obviously: what does ‘acting’ mean here? Does it mean punishing, killing (and committing a harmful act as well)? Does it mean helping?

Regarding this kind of reflections leading to more reflections, the book is clearly interesting, and tends to push boundaries and make one feel uncomfortable: none of us want to realise ‘hey, wait, but I also have such thoughts at times’, or think ‘if I don’t call a murderer evil, then people will judge me as bad and reject me’. There’s a lot of philosophical aspects to go with here, and opportunities for good discussions.

This said, I found the ‘science’ side more lacking. While many examples presented in it do rest on actual experiments and reports, and some clinical reasons are given for certain behaviours (such as studies trying to pinpoint if specific areas of the brain are involved in psychopathic behaviours, etc.), for me, it didn’t go far enough in the scientific department (such as neurology), which is why I liked the book in general, but didn’t love it. The author also adds her own opinions, and does say they are opinions (= not trying to pass them as facts), and to be fair, I do agree with them (I never once considered that mental disorders were ‘evil’…); still, that is not what I expected here.

To conclude, this one is a good read for delving into more philosophical approaches, confronting ourselves when it comes to what we consider evil, and trying to understand what the latter entails. It is much less an actual scientific book, though.