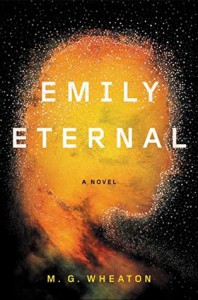 Earth is living its last months in this book: all calculations indicating that the Sun would go the way of red giants in 4.5 billions of years were wrong, and helium fusion has been detected in its core… which means the inner solar system will soon go bye-bye. On this Earth where people have forsaken money for barter, and where people try to go join their loved ones to go together, a group of MIT scientists is still working on their Artificial Consciousness: Emily, who was intended as a psychotherapist of sorts, and was “growing up” half in a simulation where she was living the campus life, in order to better understand humanity. And now, they want Emily to be the last hope of the human race.

That was super-fast read for me, because I just couldn’t stop, and kept on reading, wanting to know how all this would unfold. The story is narrated in the first person, from Emily’s point of view, and as a character with a voice all of its own, the artificial consciousness is definitely quite likeable and even funny at times. This is not only a novel about the end of the world, but also about humanity and free will; about emotions, feelings and romance; about what “being like a god” could be like; about doing the right thing because it’s in your programming, and then because you do sense it’s just the right thing to do, period. Not everyone agrees with the decision Emily’s creator went with, and thus Emily finds herself pitched against those who would uphold more drastic methods… even though, all in all, tasked with saving the world in a matter of weeks, all methods are probably going to be drastic, each in its own way.

Thanks to her supercomputer nature, Emily can easily interact with electricity, through an interface patch letting its wearers see her… but this also means she can interact with them, using electric signals in the human body, and this raises all sorts of conundrums and interesting questions about what she could do, and how far she’d be willing to go in that regard for the greater good, to save as many people as possible. And even though Emily was overall a good person, with her own morals that were so much closer to a human’s, it didn’t meant she was never tempted, or never made mistakes, for that matter. This includes the romance part (one that I enjoyed, for a change—I’m very picky about romance subplots), considering what it’s partly based on.

If anything, I’d say I was less on board with the last 10-15% of the book. While the basic premise, that of the Sun going out sooner than expected, does demand a bit of suspension of disbelief at first (“could we be mistaken THAT much about it?”), it is nevertheless grounded in a logic that makes it quickly believable. However, the solution Emily went with is much more of a stretch, perhaps because it felt like it all went too fast compared to the rest of the story? I would probably have been on board more if it had taken a little more room, rather than “this is what’s been happening during the past few months”.

Conclusion: 4.5 stars. I wasn’t completely on board with the last chapters, but Emily’s character, as well as Mayra’s, definitely make up for it.