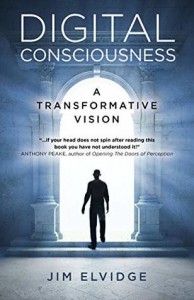 I admit I wasn’t sure what I was going into with this book (and that I don’t know anything about the author or his previous work). I requested it thinking it was a science-fiction novel, and of course realised it wasn’t one after the first couple of pages. This said, it turned out quite interesting and intriguing in terms of ideas and points developed, even though I sometimes had trouble going on.

What if our material reality is not what we think it is? And isn’t even really material to start with? Well,” why not,” is what I think about this. As much as I see myself as a materialist (I often joke that I’m waiting for the Men in Black to come and recruit me and pump me up with juicy cybernetics and bio-engineered alterations—hello, Iteration X), I also have no proof that we are -not- living in a simulation, after all. That the reality we think of as ‘material’ is not simply what the author calls a ‘Reality Learning Lab’, where consciousness goes to live through new experiences for a while, in order to learn and progress. And when you consider all the strange things quantum mechanics have forced us to consider—things that a 19th-century scientist, for instance, would have rejected as preposterous, ridiculous, and completely misguided—it’s not so silly at all. What’s to tell that in two centuries from now, we won’t have come up with something even more outlandish, that turns out to be -the- truth instead of what we knew before?

It’s probably a lot of speculation, but the arguments used throughout the book do make sense, too, so there’s definitely a part of me that won’t discard them.

I didn’t appreciate the tone at times, though, when it veered off sounding ‘objective’ and into more ‘personal’ jibes at other theories. I get the same feeling with any author who does that, really: for me, it’s all about “if you want to convince me, you don’t need to take a shot at anyone; let -me- do this on my own”. But that’s more of a pet peeve of mine. What was more troublesome, I think, was that some approaches and examples were both too simple and too complex at the same time. As in, if you already know the basics about quantum mechanics, string theory and the likes, you’d need more in-depth examples; and conversely, for someone who doesn’t know much to this, the examples/comparisons would probably not make as much sense.