The Orphanage of Gods 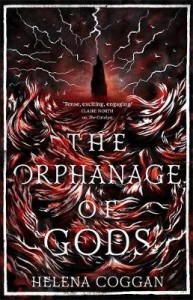 It took me ages to get into this book (actually, I did it on my third attempt), and I have no idea why. It wasn’t terrible, the beginning was sort of ‘standard’ (= nothing particularly off-putting), it read easily, there wasn’t anything stylistically bad in here, and there was a good chunk of the novel where I actually wanted to read, once I got past the first chapters. However, in the end, I wasn’t sure what the point really was in terms of the story and the characters’ evolution, and this is the kind of thing that is likely to make me forget ‘The Orphanage of Gods’ fairly soon.

I never connected with any of the characters for starters. Hero was somewhat likeable, but too whiny and dwelling on the same things over and over again. Joshua had no redeeming qualities that I can think of. Kestrel was OK but pretty much thrown in there as a puppet. Raven (who’s the narrator of the middle part, out of three) was supposed to be that super future leader, but she was 10 and didn’t do much (apart from being targeted), so that defeated the whole purpose. Eliza, well… it was very convenient that she could avoid many consequences thanks to her powers. The guards were just depicted as monsters and never anything else, and whenever another god or demi-god was somewhat likeable, they just got out of the picture sooner or later.

(Bonus point for same-gender relationship, which is a nice change; but as usual in suYA ch novels, it was insta-love and came out of the blue… so I guess that’s no bonus point, all in all.)

The ending was murky and left me unsatisfied. It felt both unavoidable (it was either that or just offing everyone, I guess) and like a cop-out, because so many things were unresolved at that point.