You Let Me In 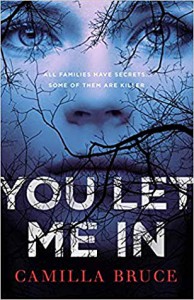 [I read this book through Pigeonhole.]

A very surprising read, in that I had an (albeit vague) idea of what it’d be about, and it turned out it was actually much more grounded in dark fantasy than in the “basic contemporary” setting I was expecting. Which was, in fact, for the best, as I got sucked in very quickly into the story. I was, as usual with Pigeonhole, glad I didn’t start on the very first day, since it meant being able to read more chapters in one go. For some books, it doesn’t matter to me much; for this one, I really appreciated that.

A word of warning about the very beginning, which makes it sound like the whole novel will be told in second person POV present tense (a.k.a something I instinctively dislike): it doesn’t last, so don’t let this stop you like it almost stopped me. The story is worth its salt after that, and this point of view quickly makes sense at the end of the first chapter.

The story follows the life of Cassandra Tipp, nee Thorn, a rumoured crazy writer living in the woods, who from early childhood had a very conflictual relationship with her family. Did she commit the murders she was suspected of, or was there another explanation? Was she crazy, or gifted with a second sight? Was she a victim of abuse, and was that abuse committed by people she should’ve been able to trust… or was there something else altogether behind it? The author toys with her readers all along, because no matter which “explanation” you decide on, the other one still cannot be completely discounted, and many situations can, in fact, be read and understood both ways.

It is a gruesome story, all in all, full of blood and ancient things, with passages clearly not for the faint of heart. Disgusting and revolting? Sure. But fascinating at the same time, so very fascinating. I had a hard time putting it off when I did, and kept wanting to get back to it. And for once, while the ending is somewhat ambiguous, the quality of this ambiguity didn’t bother me like it usually tend to.