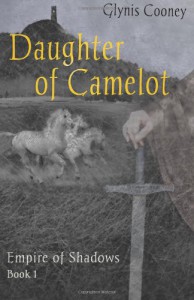 (I got this ebook through NetGalley, in exchange for an honest review.)

I usually like stories revolving around Arthurian legends, and there were good elements in this book, but I had a hard time getting into this one. I think it was a combination of weird happening and incoherences regarding the main character, with some editing problems in the middle. (NB: I'm not sure if the copy I got was an ARC or the finished product, considering when I got it and the officiel publishing date. If it wasn't an ARC, then there are definitely quite a few time shifts to get rid of—the narrative is mostly in the past tense, so whenever present tense pops up, it's jarring. It also seemed to me that the story was first written in 3rd person, then turned to 1st person, and that a couple of sentences from the previous version remained.)

The main idea, that of a twin sister deciding to fight Fate and help King Arthuer, was in itself interesting—especially considering her reputation as a "witch", because twins are considered as bad omens in such a world, and she indeed displays a few features reminiscent of druidism rather than the "new" Christian religion. Besides, I like my girl characters strong and willing to live their lives on their own terms. Unfortunately, I'm not sure this is what really happened here.

I found several things to be too incoherent to my liking. The historical mish-mash, for starters. Arthurian literature being what it is, of course I don't expect exact history, but I have a hard time seeing "Druidism vs. Christian beliefs" and "knights in shiny armour" put in the same time period. Most of the Arthurian retellings I read and liked settled on one or the other (Chrétien de Troyes's French stories, for instance, place Arthurian chivalry against a backdrop of 13th century Middle Ages and Christian times; while other books place Arthur as a chief in older times, with people and customs also fitting such times). It's probably a silly argument on my part, and I'll file it as something being really specific to me here.

What I couldn't wrap my mind around, though, was how Deirdre was portrayed. On the one hand, we have a fiery girl who's learnt to fight with swords and bows, can ride like men do, doesn't hesitate to wear breeches, wants to lead her own fights... and this is all very well. On the other hand, though, she regularly displays childsh attitudes and naive behaviours that clash with that image that I felt the author wanted to convey, and made her character inconsistent. For instance, the first time she's at court, she falls way too easily for "the knight". All right, she's "only" 14, but in such a time of turmoil, and in such societies, this just wasn't the equivalent of 14 in our world: girls would likely have been more savvy in many things at that age. I was surprised that nobody actually prepared Deirdre to life at court, except for a few pieces of advice from Nia (who basically had to get out of her way to apologise for her younger sister's blunders... every day or so). I also couldn't help but question some decisions Deirdre made, like accepting an invitation when she knew it would've reflected wrongly on her.

Now, it wasn't a bad story. It still kept me interested enough to finish it, and I liked some of the other characters, like Dewey and Sioned, who each have their own story, their own views on the world, and try to do what they can to better their situations. But I'll still leave it in my "just OK" rather than in the "I liked it" section.