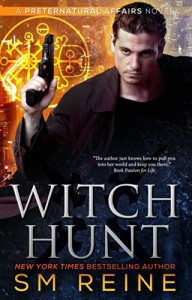 (I read this book as part of the Nine By Night set, which I got on NetGalley in exchange for an honest review. Since I'm not going to read all nine books in one go, I'm posting short reviews separately.

A quick, easy read, with a lot of action and not many breaks, which fits the theme of "man on the run, trying to find the answers before his enemies catch up to him". No problem with that, although it was rather short, and so the characters weren't that well-developed. The world seems interesting, with a Men In Black feeling combined with department-to-department tensions and underhanded maneuvers.

Mostly it's César's decisions I had a problem with: he didn't strike me as particularly savvy, considering the job he's had for the past two years. Sure, going back to the crime scene to start looking for answers is as good a beginning as any, but he didn't do it in a clever way—and the same pattern repeated throughout the story. The ending was unsatisfying: César wasn't the one who actually solved the problem, he was more of a spectator at times, and I didn't like how a couple of key clues turned out to be just there by chance.

(Also, the NbN cover blurb spoke of "strong women protagonists", but I'm still looking. The only two prominent women here either don't appear that much, or are more like the must-protect-her type under a varnish of strength.)